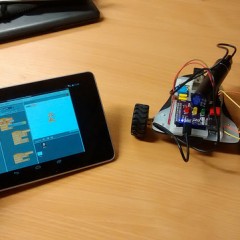 ROBOTS HAVE TAKEN OVER LIVERPOOL

We need to build a prototype to fight off the robotic menace! Grab a Raspberry Pi, and a bag of bits and build a robot to destroy the evil cybernetic overlords. Not interested in saving the world? Well that’s ok you can take a look and play with the many expansion boards and projects that Les will bring with him. join us for a day of Raspberry Pi powered fun with robotics and electronics under the supervision of Les Pounder...

Digital events coming up in Liverpool

Deck for Jelly Liverpool January 2014 from Neil Morrin NB: That I know of

This week is explosive….  We’ve two big events events on this week. Jelly Liverpool – the friendly coworking space and Ignite Liverpool – the slightly geeky talky event.  Jelly Liverpool is a day long event which gives freelance Digital Creatives the opportunity to get out of the home office and work alongside others working in the same or different fields. We get developers, sys admins, game makers and content...

All set for Jelly Liverpool

If you come to Jelly Liverpool regularly you may or not have realised it already but How? Why? DIY! has taken over the running of this top notch networking event for freelance workers. We have been given the contract after a successful pitching process last month and the first Jelly we ran one we ran was last week on the 6th September. I don’t think that many people noticed the difference between us running it and Open Labs as...