ROBOTS HAVE TAKEN OVER LIVERPOOL 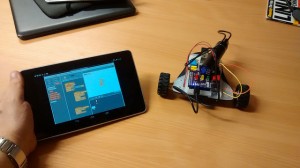 We need to build a prototype to fight off the robotic menace!

Grab a Raspberry Pi, and a bag of bits and build a robot to destroy the evil cybernetic overlords.
Not interested in saving the world? Well that’s ok you can take a look and play with the many expansion boards and projects that Les will bring with him.
join us for a day of Raspberry Pi powered fun with robotics and electronics under the supervision of Les Pounder (Linux Format, Linux Voice)
So come along to Jelly Liverpool at Leaf Cafe on Bold Street Liverpool on 5th June and join the resistance against our robot overlords.